Asia-based innovators filed more than half of all international patent applications via WIPO for the first time in 2018 on significant growth from China, India and the Republic of Korea, capping another record-setting year for WIPO’s global intellectual property (IP) services.

U.S.-based inventors filed the greatest number of PCT patent applications in 2018, trailed closely by China, which is expected to surpass the U.S. within the next two years on current trends.

“Asia is now the majority filer of international patent applications via WIPO, which is an important milestone for that economically dynamic region and underscores the historical geographical shift of innovative activity from West to East,” said WIPO Director General Francis Gurry. “Intellectual property is a critical competitive element in the modern global economy, with everyone ultimately benefiting from this race to create and innovate that results in new products that transform our world and the way people live everywhere.” 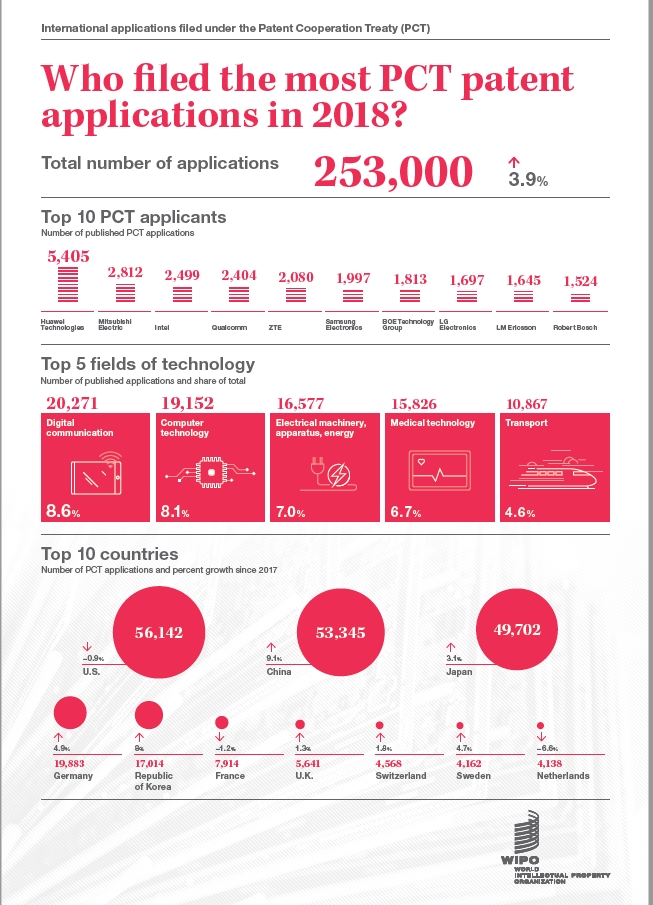 Who filed the most PCT patent applications in 2018?

Among educational institutions, the University of California was the largest user of the PCT System in 2018 with 501 published applications, extending a leading position it has held since 1993. Massachusetts Institute of Technology (216) ranked second, followed by Shenzhen University (201), South China University of Technology (170) and Harvard University (169). For the first time in 2018, Chinese universities appear in the top 10 list, which comprises five universities from the U.S., four from China and one from the Republic of Korea.

Among fields of technology, digital communication (8.6% of the total) overtook computer technology (8.1%) with the largest share of published PCT applications. These two fields were followed by electrical machinery (7%), medical technology (6.7%) and transport (4.6%). Among the top 10 technologies, transport (+11.3%), digital communication (+10.1%) and semiconductors (+9.8%) were the fields with the highest rates of growth in 2018.

Who filed the most Madrid trademark applications in 2018?

The top 10 applicants list is comprised of six companies from Europe, three from Asia and one from the U.S.